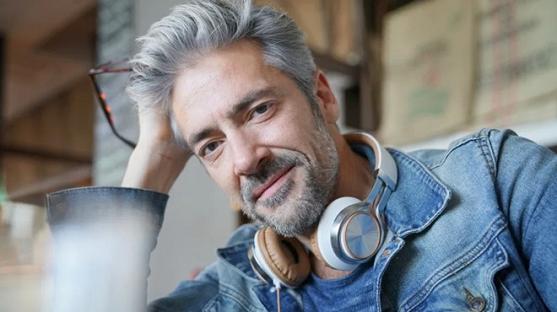 Men get breast cancer too!

Doctors used to think that breast cancer in men was more dangerous that it was in women, but now it seems about the same. If diagnosed at an early stage, men with breast cancer have a 96% chance of survival. The problem is that most men wait longer before being diagnosed. This might be because men are less aware of this disease or how to detect problems in this area of the body.

How can men develop breast cancer?

Men develop breast cancer the same way as women. Even though they don't have breasts like women, they do have a small amount of breast tissue, including milk-producing lobules, ducts that carry milk to the nipples, and fat. The 'breasts' of an adult man are actually similar to the breasts of a girl before puberty. In girls, this tissue grows and develops. It doesn't develop in men, but it is still breast tissue and can develop breast cancer. 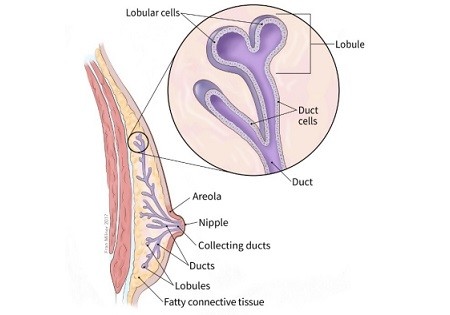 Most cancers in men are invasive, which means the cancer cells will not stay localized to the duct or lobule where they originate. In most cases, they eventually start to grow into the surrounding tissue. After the cells grow through the duct, the cancer cells can continue to grow and cause a noticeable lump or thickening in your breast. If not diagnosed quickly, the breast cancer cells can also spread to lymph nodes and other parts of your body.

Your odds of developing breast cancer

Male breast cancer makes up only 1% of all breast cancer cases. That's good news! Your odds of getting this disease are low, and for younger men the odds are even lower. This is because age is the biggest risk factor for developing male breast cancer, with most cases occurring in men over 60.

But family history and certain medical conditions and treatments have been shown to increase the odds of developing this disease. Some known risk factors for male breast cancer include:

Many men don’t think about the health of their breasts, but there are several signs and symptoms of male breast cancer to watch for. The symptoms in men are similar to those in women. Most men are diagnosed with breast cancer after discovering a lump in their chest.

There are other symptoms too. You might notice these during routine activities such as showering or changing your clothes.

Signs and symptoms of male breast cancer can be:

It is important for you to know what is normal for your breasts and to report any changes to your doctor. These changes aren't always caused by cancer, but if you notice any breast changes, you should see your doctor as soon as possible. Early detection of breast cancer increases treatment options and often reduces the risk of dying from breast cancer.

If you want to learn more about early detection and how to do a self-exam for male breast cancer, watch this video from the Male Breast Cancer Coalition:

Unfortunately, men tend to delay going to the doctor until they have more severe symptoms. A small study about male breast cancer found that the average time between first symptom and diagnosis was 19 months, or over a year and a half. That's a very long time!

Don't wait to see your doctor until you experience more sever symptoms, becasue they often mean the cancer is at a later stage, and has spread to other parts of the body.

When to See your Doctor

It is very unlikely that you have breast cancer, but it's best to see your doctor and get your symptoms checked if you have:

Your doctor will ask you about any symptoms you have and may examine your breast. Based on this information, they can refer you for tests, scans, or to a cancer specialist to check for breast cancer or other health problems. Other health conditions can cause symptoms similar to breast cancer, and it is important for your doctor to rule out any other reasons for a health problem before making a breast cancer diagnosis.

Don’t delay going to the doctor until you have more severe symptoms, like bleeding from the nipple. At that point, the cancer may have already spread.

The same techniques that are used to diagnose breast cancer in women are used in men. These can include physical exams, mammography (x-ray of the breast), ultrasound to diagnose the tumor type or guide the doctor to the best area for a biopsy, and biopsies (removing small samples of tissue or cells from the breast so they can be examined under a microscope).

Doctors used to think that breast cancer in men was more severe than it was in women, but recent evidence suggests that it is about the same.

The major difference is that breast cancer in men is often diagnosed later than breast cancer in women. 51% of men are diagnosed with an advanced stage of breast cancer, versus 36% of women. This means that for many men, the cancer will have started to spread by the time to diagnosis.

Late detection might be due to decreased awareness and because men are less likely to be suspicious of something strange in that area.

For this reason, the 5-year net survival estimate is lower for men than women, 80% versus 88% according to the Canadian Cancer Society. This means that, on average, about 80% of men diagnosed with breast cancer will survive for at least 5 years. However, when breast cancer is detected early (stage 1), the survival rate jumps to 96%.

Recovering from cancer treatment and adjusting to life after breast cancer is different for each person, depending on the stage of the cancer, the type of treatment and many other factors.

For many men, treatment can remove or destroy the cancer. The end of treatment can bring mixed emotions, both stressful and exciting. For other people, the cancer may never go away completely. Some men get regular treatments with chemotherapy, radiation therapy, or other therapies to try to help keep the cancer in check. Learning to live with cancer that does not go away can be difficult and very stressful.

Many men find it difficult to talk about their breast cancer diagnosis because it is often seen as a cancer that only women get. Some will find it hard to reach out for necessary support.

We are here to help both men and women to thrive after breast cancer. Take a look at our website and other blog articles for our support options and educational resources on healthy habits, dealing with emotions, and more.

If you are still curious about male breast cancer and want to learn more, visit: